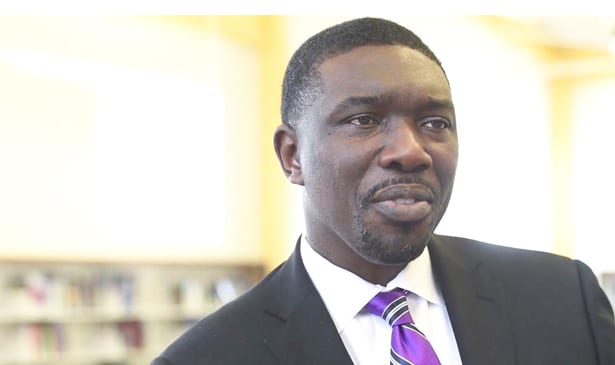 The calendar may say it’s 2019, but for some white folks and stupid black folks, it will never be the right time for a Black man to be in charge of anything. Especially if that man is smart, confident, experienced, and unwilling to act as though it’s a privilege and honor to be around and in charge of an institution with whites working under and for him.

Dr. Shawn Joseph is a super intelligent, accomplished educator. He’s also a Black man who’s unafraid to be assertive and forceful in his presentation and personality. That apparently doesn’t sit well, not only with some white folks, but some Coloreds as well. Unfortunately Dr. Joseph is dealing with the same thing that’s often undermined other Blacks in leadership and power positions in Nashville. That’s collaborators willing to do the work of whites, and be their lapdogs in doing everything they can to make it look like a Black man is incompetent and should be fired.

The Tribune is unwilling to sit back and watch this garbage without letting our readers know what a sham and farce it is for anyone to question or attack Dr. Joseph’s credentials and abilities. We’re seeing behavior at the Board of Education meetings more fitting for television situation comedies than people supposedly concerned with the education and well being of future generations.

There are board members giving interviews who act more like rejects on a reality TV show than people in positions of authority. They certainly don’t present themselves in a manner that makes them look competent or professional to question anyone’s leadership abilities or qualifications, let alone Dr. Joseph’s

Here’s just a short list of things Dr. Joseph and his team have accomplished in the last couple of years. All of these, by the way, are matters of public record, not our opinion.

1. Ensured all students in elementary and middle schools have access to gifted and talented

have at least a part-time person serving students.

and to provide more socio-emotional support to Pre-K students.

7. Worked with the Mayor’s office and with the non-profit sector to create the “Blueprint for Early

Childhood Success.” This is our action plan for doubling the number of students reading on grade level by 2025. We successfully achieved year-one benchmarks in reading.

8. Developed a strategic plan for the district with clear accountability measures and a new evaluation tool for the Director. Michael Casserly, executive director of the Council of Great City Schools, deemed the evaluation tool one of the most rigorous in the country.

9. Average ACT scores have increased from 18.7 to 18.9, with more students taking the exam. In addition, more students are earning a 21 or higher on the ACT.

10. Reading scores for grades 3-8 grew faster than the state on the state assessment for the first time in recent history.

11. Suspensions are lower than previous years – reducing suspensions by 1,782 infractions from

12. Changed the administrative procedure to stop suspension of Pre-K through grade 4 students

without the approval of a community superintendent.

13. Changed the Title I funding formula to provide more dollars to our neediest schools.

14. Ensured all schools have a qualified literacy coach.

15. Expanded rigorous reading curricula in elementary schools by revising the scope and sequence, and by purchasing more rigorous units of instruction.

16. Reorganized Central Office to have community superintendents and principal supervisors provide more direct support to schools and differentiate supports based upon geographic areas.

17. Established a Science, Technology, Engineering, Arts, and Mathematics (STEAM) focus at 18 middle schools, and ensured that coding is offered in those schools with a reduced technology ratio and more targeted professional development for teachers.

19. Minimized cuts at the school level while finding $15 million in cuts due to funding constraints in the city.

20. Established an Early College program for grades 9-12 in collaboration with Nashville State

21. Established a Transition Team which identified 121 recommendations to improve the school system – and 91 of the 121 were completed in the first year of work. At a recent Board retreat, new priorities were identified to be addressed in this school year.

The Tribune is not claiming Dr. Joseph is perfect. If there are areas of concern, let’s examine and address them. Certainly there are areas where things can be better. But it is totally ridiculous for anyone to claim Dr. Joseph hasn’t made substantial improvements in many places, and it is absurd for certain folks to be upset because he hasn’t embraced their off-the-cuff suggestions, or doesn’t cozy up to them for coffee and small talk. Or introduce their material for use (for profit) into the system.  He’s too busy trying to make things better for metro students.

Sometimes people confuse personality and competence. The two have nothing to do with each other. There are some folks who are naturally effusive, friendly, and cheery, others who are matter-of-fact, brusque, and uninterested in anything beyond making sure things are running smoothly and efficiently.

Neither approach is right or wrong, just a matter of style and preference. If Dr. Joseph doesn’t choose to be warm and fuzzy, that’s his right. That’s got zip to do with his abilities or effectiveness, and it’s too bad there are people on the board unable, unwilling, or both to make a distinction between things that matter (track record, daily efficiency, dedication to the job) and things that don’t (being a cheerleader, glad handing folks, smiling and cracking jokes).

We urge Dr. Joseph to continue doing his job, and not worry about trying to make certain Board members feel important, happy or being their buddy. They need to focus on what they were elected to do, which is work with the Superintendent for the educational betterment of all the students. It’s not his job to be their friend, but an advocate for students and parents. And it’s certainly not their job to advise teachers to wear masks to meetings, or make false claims on television that race has nothing to do with this situation, because everyone except those who are blind, naive, or just dumb can clearly see it does.

Finally, it is sad to see a black female board member who has 5 black sons, disrespect the only black superintendent of schools in a system which began around 1821.  It took Nashville 191 years to hire a black superintendent. It took 191 years for the white male superintendents to destroy the school system. It is so sad to think that I spent my adult life fighting for justice for the  “underserved population’’ of individuals in this nation, and who have historically been outside the purview of arts and humanities programs, due to lack of income and living below the poverty line.  Yes, I must also include those who do not deserve to hold  public office because they dishonor the community as a whole.  Remember, When school board members play “stump the stars.” everyone looks bad. Ambushes and sniping are terrorist techniques.  Just stop it.