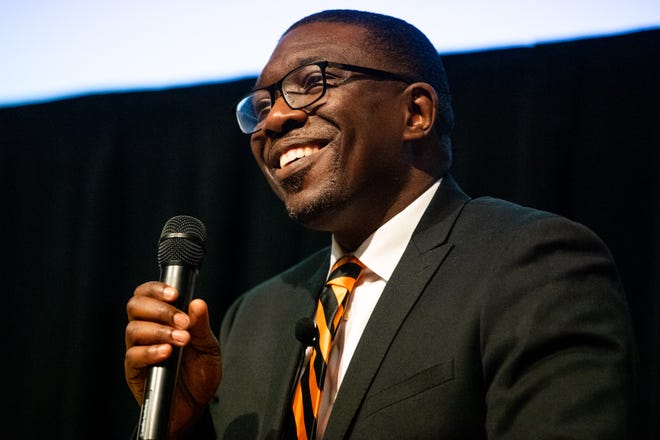 In one of his first public appearances since board members bought out his contract, former Nashville public schools Director Shawn Joseph told business and community leaders Monday they must demand “equity and excellence” for all students.

“City, political and business leaders silent across America continue to perpetuate a system of haves and have nots, and we have to care about other people’s children just like we care for our own,” Joseph said in a speech to the Rotary Club of Nashville.

He also made a call to action, laying out five items Rotary Club members can do to support the city’s schools. They are:

School board members bought out Joseph’s contract April 17 after three on the board called for him to be fired due to issues around contracts, communication and sexual harassment allegations against Metro Nashville Public School employees.

During his address, Joseph said Nashville had the potential to become “Wakanda,” a fictional country from the Marvel superhero movie “Black Panther.” The country is a utopia of wealth and technological prowess.

The way to make his Wakanda vision come to fruition, Joseph said, is through the list of action items. Joseph also said communities must have a “strong, multi-ethnic coalition” that can share their experiences in calling out what is needed.

“Nashville actually has all the elements to be Wakanda-like,” Joseph said.

Joseph said many students were living in poverty and that some demographic groups were disproportionately affected.

He said these issues have been prevalent since 1957, the year Nashville developed plans to desegregate schools.

In the years after the change, poverty has been an unwavering problem for those in urban education systems. According to 2018 data from the Nashville Area Chamber of Commerce, 22% of children in Davidson County live in poverty, and the majority of the region’s counties had an increase in students participating in free and reduced lunch programs between 2007 and 2016.

Joseph said that, due to the challenges facing urban education, he is working with several nonprofits to help families and communities “have a voice.”

He mentioned a new initiative he is working on called Nashville Unchained, a collaboration with nonprofits such as the Equity Alliance and Gideon’s Army.

Nashville Unchained’s website states that Nashvillians must vote to fight against political corruptness, invest in businesses and organizations that strengthen the community, and use “our voices” to bring about change.

“It is imperative that urban communities, particularly the parents that send our children to our public schools, begin to use their voices to bring about change so that we truly can have equity and excellence in our schools,” Joseph said.

Joseph also said he is finishing up a book, “Finding the Joseph Within.” A preview of the book’s preface can be found on the Nashville Unchained website.